EDIT: This was posted to Hacker News. More details about the hardware can be found there!

I won this e-bay auction.

The item that was aucioned was an authentic decomissioned server blade for the World of Warcraft realm that I play on, Sunstrider (EU). On launch, each WoW realm was powered by 4 of these blades, and I got my hands on one of them when they auctioned them off after doing upgrades across the board for all realms.

I got lots of internet points as a result. Here's a direct link to the gallery, which at the time of writing has 1.9 million views.

Someone PM-ed me recently on Reddit, asking which exact model and type of server blade I have. So I thought I'd document that here, in an epic instance of OP delivers, for the sake of Google, the internet, and the future.

The server is a HP blade server. I've never tried booting it, doing so would require access to an expensive proprietary HP blade server enclosure. These aren't exactly standard ethernet and AC ports. 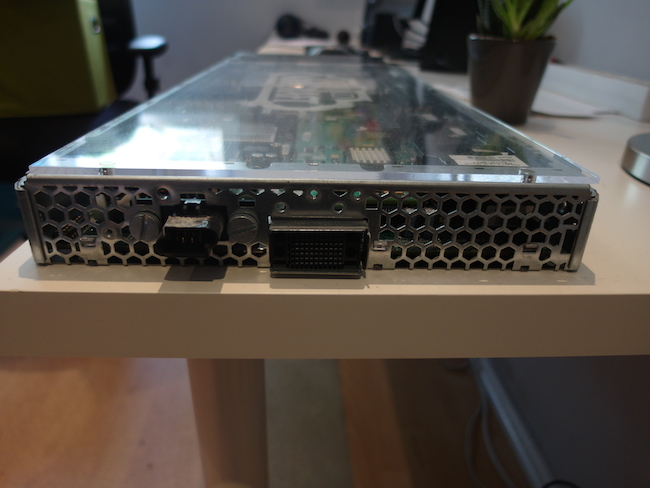 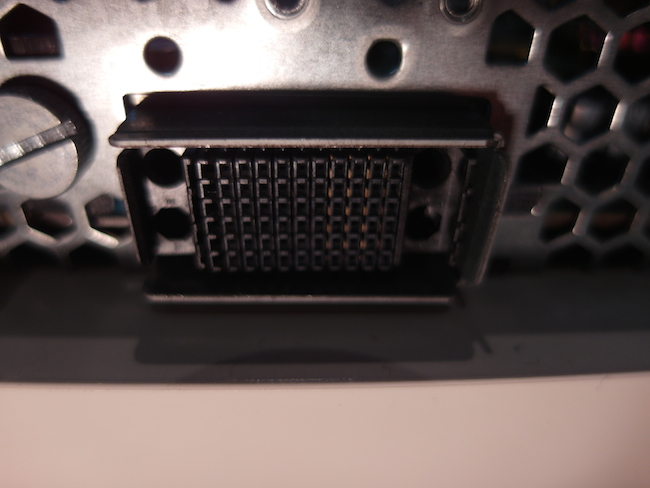 The SCSI bays are empty anyway, so I don't have an interest in booting it. (Bonus curious daughter in the background.) 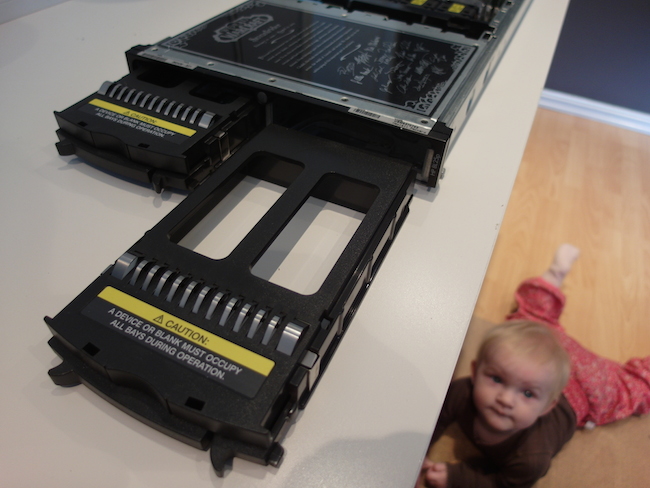 The exact make and model is HP BL25p 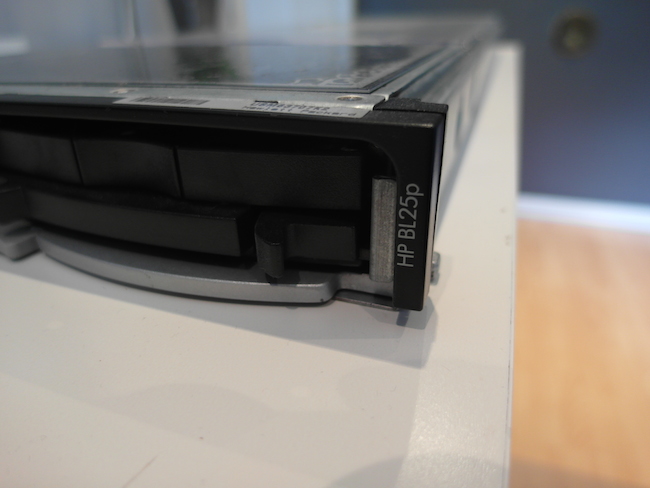 Some more markings on the front (on top of the SCSI bays) I'm not sure what means. 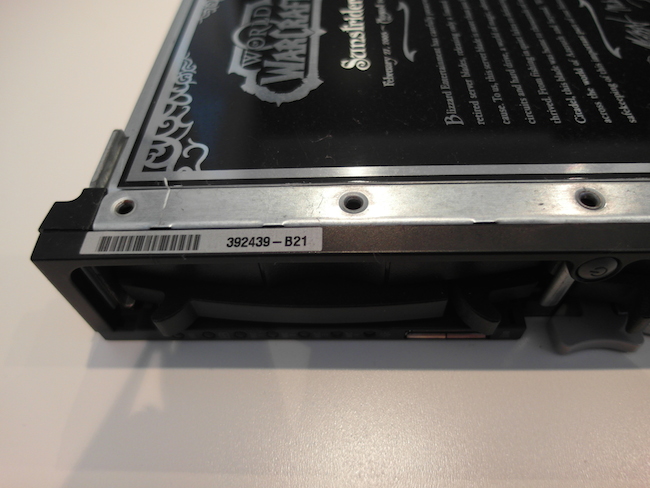 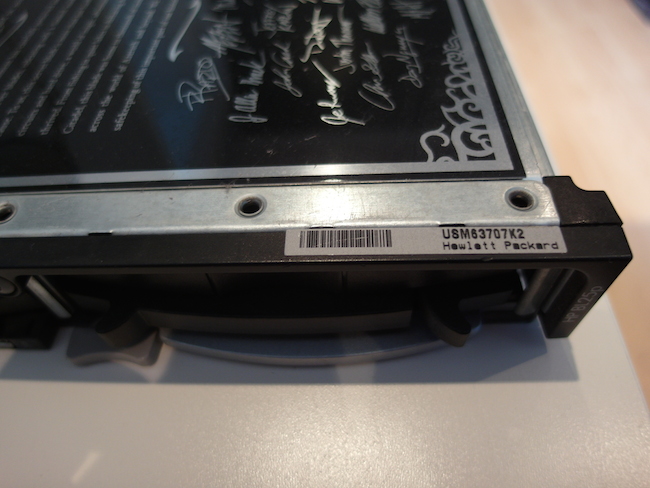 8 RAM slots are availabie, only 6 are inhaited. All slots contains ECC RAM. It is possible that these servers had more RAM when they were live. Perhaps Blizzard recently upgraded the servers, and kept two of the newest RAM chips from each old blade and put them in the new servers. 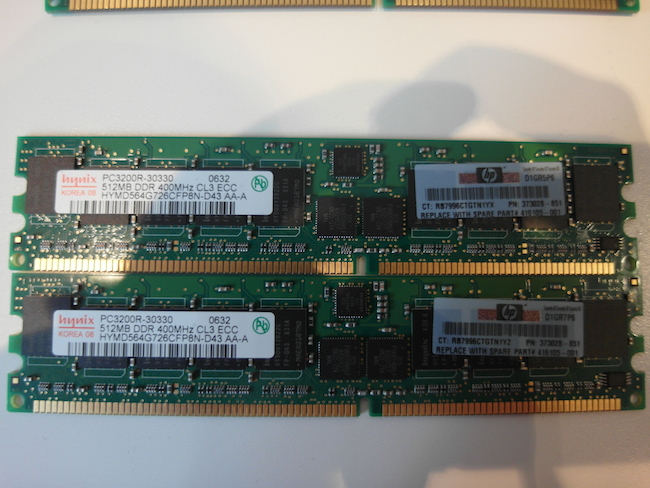 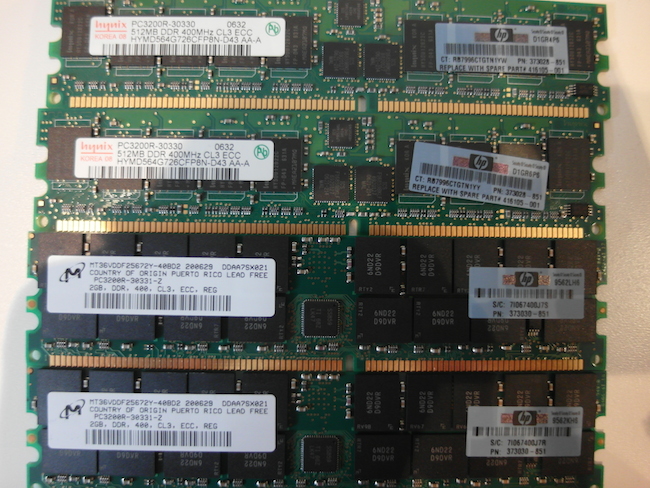 Here's the RAM mounted in the server. 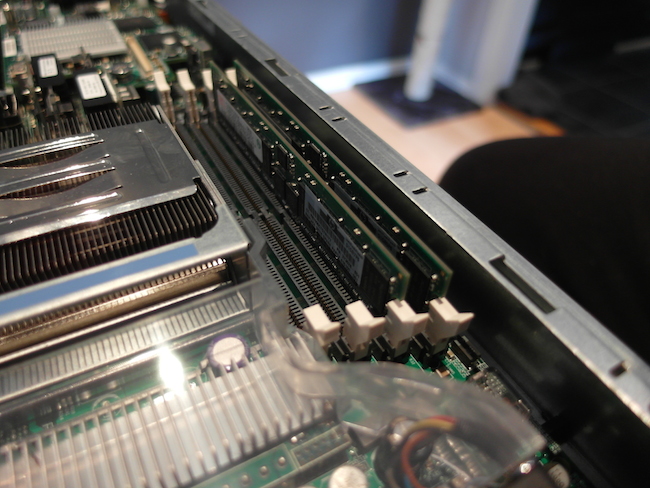 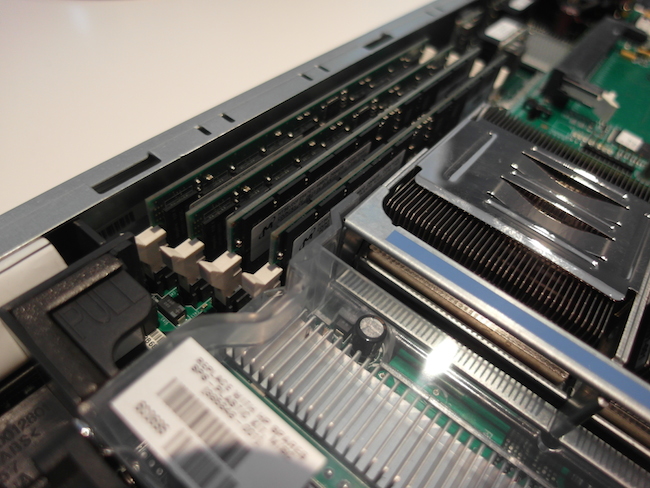 I haven't removed the CPU heat sinks, so I'm not sure what type of CPU it runs. There are two CPU slots, I don't know if there are CPUs in both. I don't want to risk breaking the mobo, the thermal paste is probably hard as rock by now. 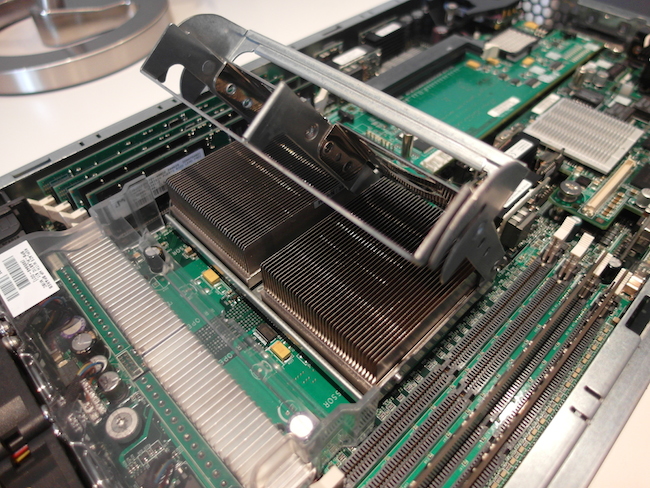 The lid in front of the motherboard is plastic, and it snaps to the case with magnets. A magnet can be seen next to my thumb in this picture. 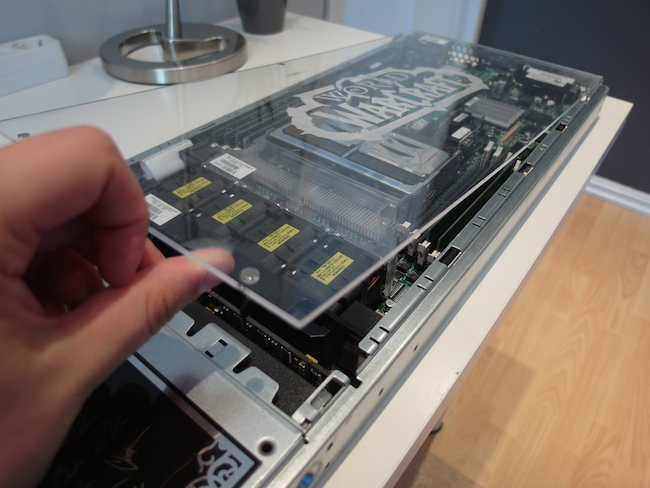 There are lots of small and (to my eyes) non-standard expansion cards attached to the mobo. 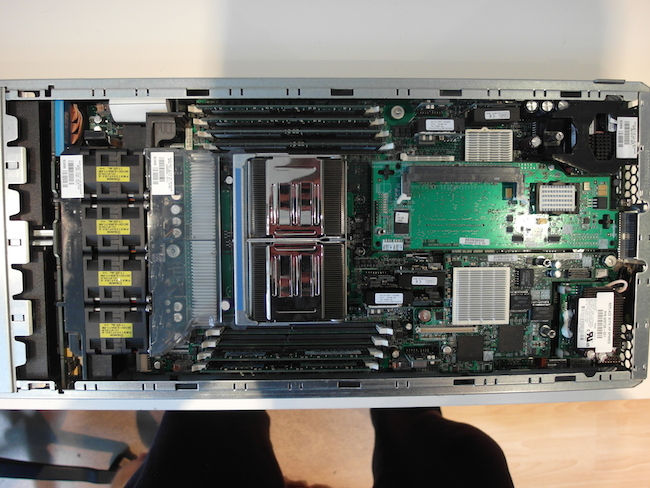 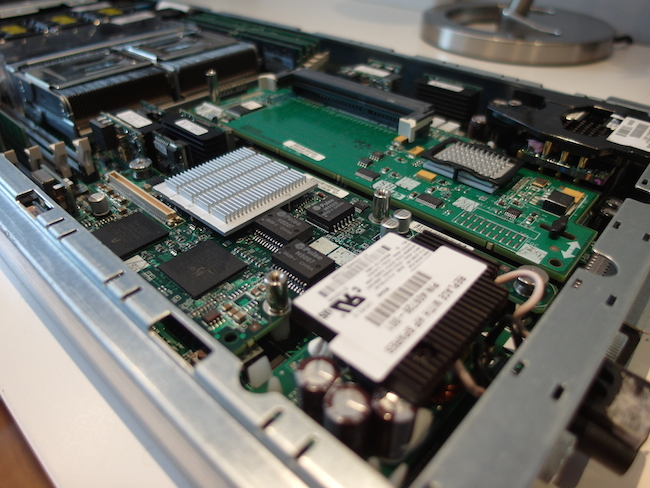 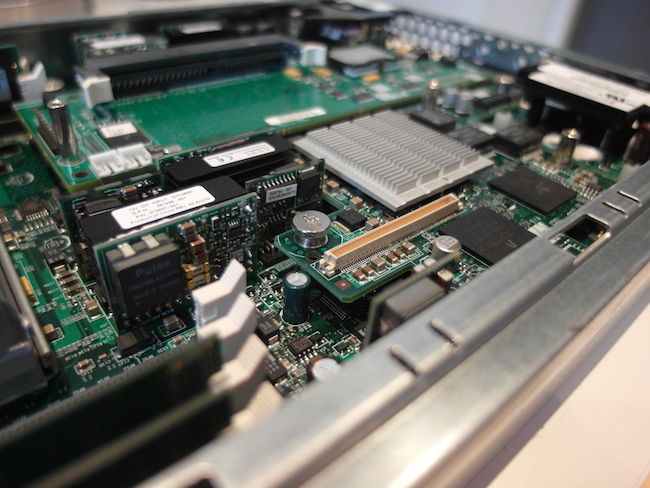 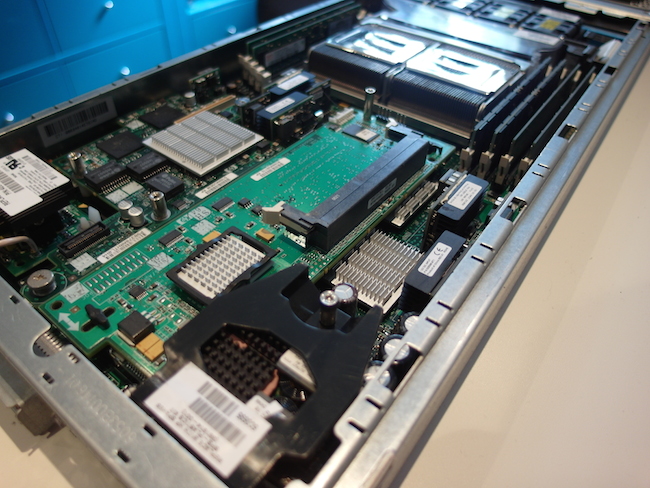 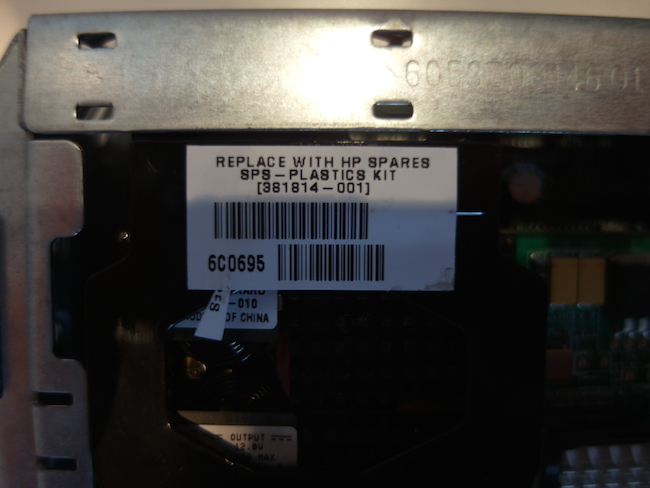 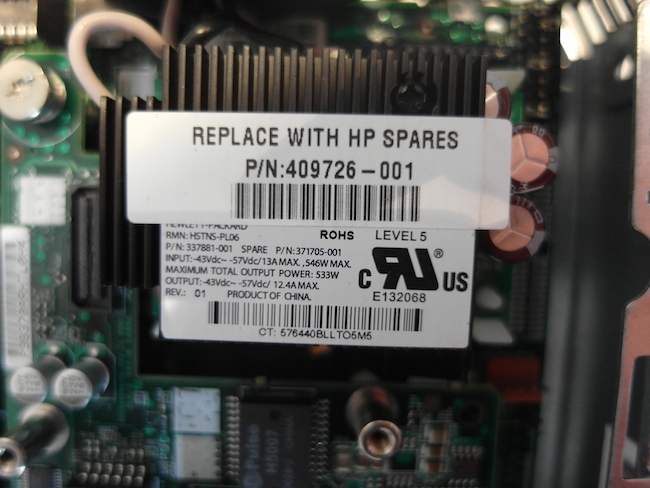 The 4 blades for each realm was, as far as I know, divided up as one blade for each continent (Kalimdor and Eastern Kingdoms), one blade for chat, and one for instances and raids. Which of these 4 blades I own, I don't know. 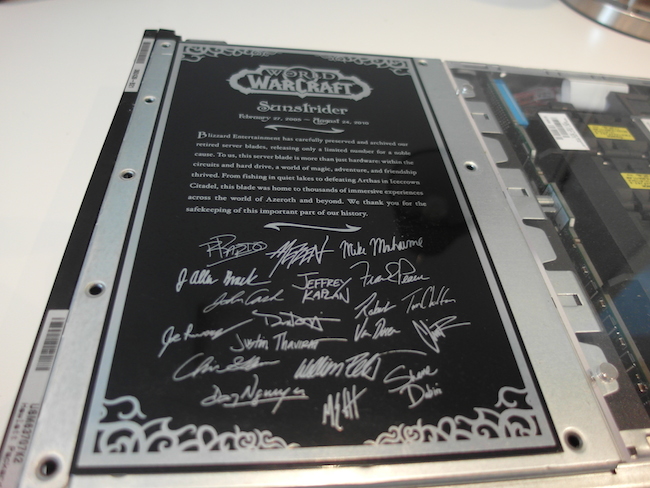 Blizzard Entertainment has carefully preserved and archived our retired server blades, releasing only a limited number for a noble cause. To us, this server blade is more than just hardware: within the circuits and hard drive, a world of magic, adventure and friendship thrived. From fishing in quitet lakes to defeating Arthas in Icecrown Citadel, this blade was home to thousands of immersive experiences across the world of Azeroth and beyond. We thank you for the safekeeping of this important part of our history.

I'm going to hold on to this one and care for it as if it was an original Picasso!

Update: More info about the server

Matthew Evans wrote me an e-mail with some more info about the specs and what not. Thanks, Matthew!

A little background on myself. I am a Technological Operations Manager at a multi-million dollar company. I have worked with these blades before in the past and can pretty much tell you anything you want to know about them.

For starters you are correct that the enclosure is expensive. The enclosure that it first into is a P-Class Enclosure (There are two different types of enclosures P and C). The number that you aren't sure of what it means is a SKU number (392439-B21). It tells you what is inside the system, in this case it would have originally came with two AMD 2.2GHz dual core processors and 2GB of memory.

The expansion cards are actually standard in there. As you can see the big green one that has two clips is your storage controller card, it looks like a Smart Array 6i controller (controls the hard drives for RAID capability), it is actually missing the cache card that is supposed to be installed in it (64MB cache). Four (4) PCI-X Gigabit embedded ports consisting of two (2) NC7781 and one (1) dual NC7782 One additional 10/100 NIC dedicated to iLO Management.